Let’s face it, our shower water just isn’t safe. Not to drink and not to bathe in, which is probably why you’re here.

Somewhere along the line you’ve probably learned about what’s causing your hair to remain dry and easily damaged, no matter how much leave-in conditioner you use. Or, maybe your nails break way too easily or you’ve suddenly developed chronically itchy skin that no moisturizer can calm.

With the culprit obviously being your shower water, you’re probably in the market for a showerhead filtration system to put an end to all the damage and despair. However, there are tons of shower water filters on the market and you know nothing about these products or where to start.

Consider this your crash course, complete with a brief but honest review of some of the best showerhead filtration products out there that can purify your shower water.

Read on to learn more.

Why You Need a Shower Water Filter

Put simply, you’re currently showering with tons of toxic contaminants that are freely slowing through your household water supply on a daily basis.

While you’re not actually drinking from your shower head (at least, we hope you’re not!) your skin, hair, and nails are absorbing the water that comes out. You’re probably already aware of the fact that hard water does a number on your body. Over time, it causes your hair, skin, and nails to become dry and brittle, leading them to split and crack.

However, chlorine and heavy metals also contribute to the damage by making an already dry situation worse by completely damaging the skin’s natural barrier. Eventually, when the barrier is broken down, it has a hard time retaining moisture—hence all the dryness—and it can’t protect you as well from the harmful bacteria, pesticides, and other contaminants in your shower water from entering your body.

By installing the right shower filter, not only can you soften up your water, but you can keep all of these nasty contaminants at bay. That way, when you step out of the shower, you’re actually clean.

The Top Shower Filters For Hard Water on the Market Now

When it comes to choosing a shower water filter, you have a world of options to choose from. That, in and of itself, makes shopping for the right one a bit overwhelming. More often than not, the average person ends up with a shower head filtration product that just doesn’t deliver on its promises.

What’s worse is that said customer is non-the-wiser to the fact that they just wasted their money and are still damaging their skin, hair, and nails each time they shower. To take the pain and frustration out of your shower head filter shopping, we’ve narrowed down the search to four of the leading products out of thousands.

Understandably, not everyone can afford a top-of-the-line shower filtration product. However, GE makes a pretty decent one for around $24 for those on a tight budget.

One thing we like about this GE shower filtration product is that it’s a straightforward product, meaning it doesn’t come with any marketing gimmicks or ridiculous claims. It does what it says it’s going to do, it’s affordable, easy to install, and that’s that.

This filter, in particular, is made to fit most shower head setups and actually does a pretty decent job of filtering out chlorine, hard minerals, and some sediment. The filters are also good for up to six months, and replacement filters cost around $16, making it a $32 a year investment after buying the initial product.

However, it’s not designed to filter out heavy metals or any other type of chemical contaminant such as removing chlorine. The GE showerhead filter does not use a granular activated carbon filter nor does it come with a vitamin c filter.

If toxic metals are the main source of your pain, the QuenchPure KDF-55 shower filter may just be your best option.

For about $39, this KDF filter can be installed universally and the filters are made from copper and zinc, which creates a small electrical charge that actually renders toxic metals inactive by dissolving them. It also uses activated carbon.

The company also claims that the KDF filter reduces chlorine and other contaminants, which we like. What we don’t like, however, is that the company claims their filter can help soften your shower water but doesn’t incorporate the proper materials or technology to do so. 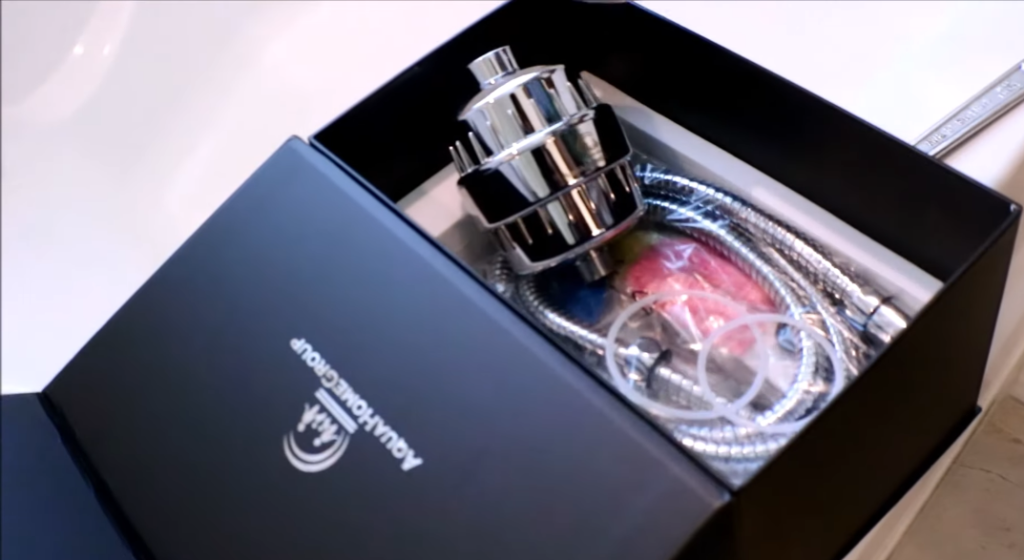 Despite boasting a 15-stage filter system, the Aqua Earth Vitamin C shower’s claim to fame is that it’s designed to remove chlorine and chloramine fluoride while infusing vitamin C into your tap water to give your dry skin a nice vitamin boost.

This is the type of filter to purchase if your only shower water concerns are chlorine and its associated chemicals, as it won’t do anything to mitigate metals, etc…

We appreciate the universal fit and focus on getting rid of certain harsh chemicals. The vitamin C infusion is also a nice addition. We also appreciate that the company is honest about the filter’s purpose and design.

Also, it easily connects to your shower pipe with the included tools.

However, for $39, it would be more cost-effective if they included filter media to reduce heavy metals as well.

For $39, the GoodFor Company’s 8-stage shower head filter is incredibly cost-effective as well as physically effective. It’s also one of the few shower filters on the market that actually reduces your shower water hardness thanks to its high-quality filtering media and technology like activated carbon and kinetic redox media.

It also works with your existing showerhead and removes the most harmful contaminants such as removing chlorine and other chemicals that pose a serious health risk.

Unlike some water filters, The GoodFor 8-stage shower filter is essentially designed to remove as many contaminants as possible. That includes all the chemicals, metals, minerals, arsenic, bacteria, and other nasty stuff lurking in your shower water. It’s also super easy to install, and it doesn’t mess with your water pressure or overall water flow rate like other inline filters.

Due to the high level of filtration, it also turns your hard water into soft water.

The GoodFor Company is also a woman-owned business that backs its products using science and rigorous testing, as well as the most sustainable and environmentally-friendly materials possible.

We really can’t think of any disadvantages when it comes to this one, which is what makes it our top pick!

Top Pick and Runner Up:

If you are truly looking for the best shower filter and you afford and want a shower head filter that was designed to make a positive impact on your health, we’d recommend the GoodFor Company’s 8-stage shower filter. It’s made with the environment and science in mind, not to mention, it does exactly what it’s made to do. Plus, at $39, it’s still pretty affordable!

However, if we had to choose a secondary product from the above list, we’d go with the GE Universal shower water filtration system. What can we say? We appreciate an honest and straightforward product!

Water filters can be tricky so when it comes to choosing a tap water filtration product, you want to get the most bang for your buck while also ensuring the product will become a beneficial part of your life.

The GoodFor Company can guarantee that. We’re a family-owned and operated company that firmly believes in science and products that have been proven effective through rigorous testing and research.

Check out what everyone is saying about us and see for yourself!